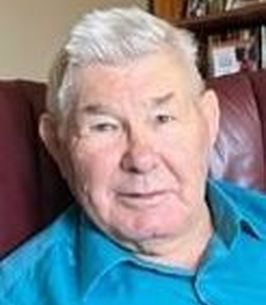 Hedley David Clarke of Spaniard’s Bay passed peacefully away after a short but sudden illness on October 26, 2022, just a few days shy of his 87th birthday.

He was predeceased by his mother and father (Violet and Cecil), as their eldest son he leaves to mourn a large circle of family and friends including his two brothers George (Florence) and Graham (Daphne) and his five sisters Jean (Ron), Elsie, Mildred (Wayne), Norma (Wayne) and Sadie. At his core Hedley was a family man and was always devoted to building a better future for his cherished wife Gladys over the 64 + years they were married. Their children Hedley Jr (Marjorie-Marlene), Beverley (Barry), Philip (Charlotte) and Keith (Kelly) were the main benefactors of his devotion to family, but his love often came with a few thorns, as he loved to argue as much as he loved his family. While he could pinch a penny with the best of them, he was always generous with his time and knowledge (and money too begrudgingly) especially if something had to get built or fixed. It was often the case that his adult children would ‘plan’ projects for when dad was visiting as he had to stay busy, or he would drive everyone nuts!

As is often the case he was more at ease with the next generation, and he simply adored his 7 grandchildren (Katie, David, Tara, Ashley, Shane, Kathleen and Holly) and his 3 great grandchildren (Ayva, Parker and Paxton). While we are all mourning the loss of our family patriarch we are comforted by a lifetime of cherished memories.
In many ways Hedley was a man of simple tastes and pleasures, his work ethic was notorious and when a project was started it often involved 12 hours days until it was finished, generally to the chagrin of his much younger co-workers (later in life these included his children!). He had a strong sense of community and often volunteered his time; from the early days of minor hockey in Conception Bay North, to serving on the early versions of recreation committees and the volunteer fire brigade in Spaniard’s Bay to more recently as part of the ‘park committee’ in Golden Arm Park where Hedley and Gladys spent much of the last 25 summers. He enjoyed the outdoors, but it was debatable if the fishing or berry picking was the main goal or the ‘boil-up’ with lassie bread was more important. But in years gone by, he could often be found ‘drowning worms’ up at Big Pond and there wasn’t a wild berry safe anywhere he could reach, just two weeks before his death he was picking wild cranberries over in Port de Grave. In general, it was a life well lived.

In lieu of flowers the family invites those that are able to donate to either Holy Redeemer Anglican Church or to the Trinity Conception Placentia Health Foundation in Hedley’s name.