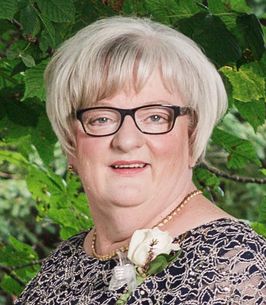 Mrs. Judy O’Dell - May 16, 1953-August 11, 2022
Passed peacefully away at Carbonear General Hospital, in the presence of her family, Mrs. Judy O’Dell (nee Hurley). Judy courageously battled cancer for the past several years with a positive attitude that was inspiring to those around her.

Judy had a long and diversified career with the NL School Tax Authority, the Labrador Roman Catholic School Board, Service Canada, and the Government of Newfoundland and Labrador. She served the town of Happy Valley-Goose Bay as a councilor and as Deputy Mayor for several terms. Mrs. O’Dell served on numerous government and community committees over the years on issues such as combined councils of NL, environment issues in Labrador, the Group Home Board, and others.

Her great passion in life was providing hospitality for others. Judy was well known in her community as a wonderful hostess, cook and baker. Some of her tastiest dishes included her seafood casserole, various salads and jigs dinner. Her apricot raisin cake, date squares and homemade bread were family favorites.
Judy worked with many community groups in her role with Service Canada and later with the Government of Newfoundland and Labrador.

She was known to go that extra mile to ensure that the volunteer and community groups with which she worked received optimum grants for which they qualified. Her greatest joy in life was to celebrate the successes of her children Kathy, Stephen, and Gary and her granddaughter Jaden.

Judy has been a house mate with her mother since 2001 and her warm presence leaves a great void there.

Your life was a blessing, your memory a treasure. You are loved beyond words and missed beyond measure.

Flowers are appreciated or in lieu of flowers donations can be made to the All Hallows Cemetery Committee.

The Funeral Mass will be held on Monday, August 15, 2022 at 11 A.M. from All Hallows’ Roman Catholic Church and Cemetery, North River.

Condolences may be written to the family at: sladesfuneralhome.ca , on the Memory Wall section of the obituary.