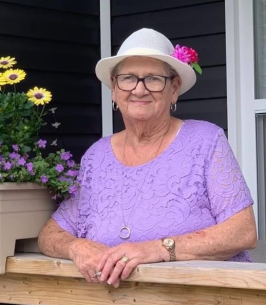 Leah was born June 6th, 1939, the only daughter of the late Selby and Marjorie Parsons of Salmon Cove, Conception Bay. Leah lived a full life dedicated to raising her family and caring for others. She started her nursing career at the Waterford Hospital, St. John’s, where she met, the late John Crane, her loving husband of 64 years. She was a long-time nursing employee of the former Harbour Lodge Nursing Home, Carbonear, a member of LOBA and Crystal Chapter of Upper Island Cove.

The Funeral Service will be held on Saturday, October 29, 2022 at 2 P.M. from St. Peter’s Anglican Church & Cemetery, Upper Island Cove.

Condolences may be written to the family at: sladesfuneralhome.ca , on the Memory Wall section of the obituary. For further information please call Slade’s Funeral Home, Upper Island Cove at 589-2250.