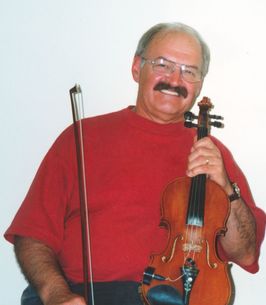 Rendell Mercer passed away peacefully at his home in Spaniard’s Bay, September 18, 2022. In this final chapter Rendell lived, as he did his entire life, with the love and support of his family and friends. Rendell was born on August 16, 1940 to James and Elsie Mercer. He married Gladys Parsons on December 27, 1963.

As a young man growing up in Upper Island Cove, Rendell ("Fox") was surrounded by music in local dances and kitchen parties. His parents, Elsie and James, recognized his love of music and purchased him his first violin from the Eaton’s catalog. Rendell quickly went about learning the instrument from musicians in his community.

In his teens, Rendell formed the band The Twilights, with his brother Verdon, Clayton Coombs, Eddie Reid and Albert Drover. The boys quickly became a favorite live act and found themselves traveling throughout Newfoundland performing at packed dances and parties. He cherished the years of music making with his bandmates.

Rendell graduated from Memorial University with a Bachelors of Education and later a Masters of Education (Administration). He settled in Spaniard’s Bay with his family and began an incredible teaching career, the majority of which was spent as a school principal in Holy Redeemer School. Rendell loved working with children. Over his years in the school system he promoted the growth of music education and specifically the music of our province. His passions often took him outside the school system as he took an active role in his community. For a period, Rendell took on the role of Deputy Mayor for the Town of Spaniard’s Bay and he took great pride in his 18 years of leading the Sunday School program at Holy Redeemer Church.

Rendell and Gladys’s family grew in their Spaniard’s Bay home, welcoming Robert, Stephen, Andrew and Susanne. They delighted in their growing family and taught the importance of love, patience and integrity, making the Mercer household a place of music, laughter and love.
In 1992, after a wonderful 30 years of teaching, Rendell retired and returned his attention to his early love for the fiddle. Moving from the role of teacher to student, he now had the time to focus on his music. He went about learning everything he could from the musicians he met, all the while sharing his passion for the instrument with everyone he encountered.

Along with playing the fiddle, Rendell had always been interested in the art of violin making and restoration, so he began studying this in earnest. He quickly became an expert, reading everything he could find on the topic. Over the years Rendell has restored and repaired hundreds of violins in his Olde Violin Shoppe.

As much as Rendell enjoyed restoring violins, his true passion was in playing the instrument. For seven years Rendell spent his summers at the Cape Breton College studying Celtic fiddling with such musicians as Buddy MacMaster, Jerry Holland, and Natalie MacMaster. Working with these kindred spirits validated the work he was doing back at home and provided him with vision to help resurrect Newfoundland fiddle, as had been done in Cape Breton.

Back home Rendell welcomed many fiddle students, both young and old. His passion for the instrument was contagious and his reputation as a master fiddler quickly spread until people were visiting from all corners of the Province. Whether to play a 200 year-old violin or learn a new jig, there was always someone playing the fiddle at Rendell’s home.

From the years of performing with The Twilights, Rendell knew the value in making music as an ensemble. In the mid-1990’s there was no opportunity for young fiddlers in Conception Bay North to engage in high-level ensemble playing. To provide this opportunity Rendell decided to create the Baccalieu Fiddlers. This group performed throughout eastern Newfoundland and quickly made a reputation as a superb ensemble. In 2000, the Baccalieu Fiddlers were invited to perform with the Newfoundland Symphony Orchestra. Many of these young musicians soon became teachers themselves and began to share Rendell’s contagious passion for the fiddle with their own students.

For decades Rendell has shared his love of the fiddle with young musicians with over 750 fiddlers learning to play in the front room of his home in Spaniard’s Bay. Rendell has also been a mentor to many music teachers throughout NL as they incorporated the fiddle into their school music programs. Rendell's legacy of fiddle education and love of the instrument will forever be heard from concert halls to kitchen parties throughout NL.

Rendell’s kindness and music will be dearly missed. His legacy will live on forever in the hearts of his loving family and the many friends who have had the privilege of being a part of, and be inspired by, his wonderful musical life journey.

The Funeral will be held on Wednesday, September 21, 2022 at 2 P.M. from Holy Redeemer Anglican Church, Spaniards Bay with interment to follow at St. Peter’s Anglican Cemetery, Upper Island Cove.

Condolences may be written to the family at: sladesfuneralhome.ca , on the Memory Wall section of the obituary. For further information please call Slade’s Funeral Home, Spaniards Bay at 786-1613.